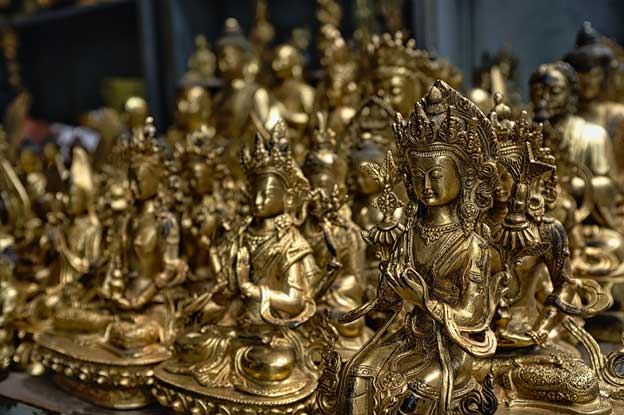 As soon as we arrived, Chinese merchants surrounded us because they knew we were tourists; I’m still wondering how they figured that out. They used very basic phrases in English to attract our attention; that’s what I call practicality. You don’t need to study complicated grammar patterns to speak a  language. Those guys at the fake market were mostly saying “Hello, do you want a watch, a belt, shoes? Follow me”. Well, not that exact phrase, but you get the idea, and so did we, we understood them easily.

Note: The term “fake” is not pejorative here. The sales clerks admit their products are fake, but they will also say that the quality is very similar to the original products, if not the same; for a better price, of course.

I’ve seen great salesmanship in action. I remember looking at a pair of Nike sneakers when the sales lady approached me and fervently suggested I try them on. I asked about the price. She told me that money was not a problem, and that I should try the shoes first and then we would discuss. She pulled an amazing psychological trick on me: letting the customer check the product without talking about the price. People are more inclined to buy if they develop an emotional connection to that item through touch. I was immune, not necessarily because I knew the trick, but because I didn’t really need new shoes, a.k.a. extra baggage. Hats off for that woman anyway! Or shoes off! (ugh).

Haggling (讨价还价) is an important part of the Chinese culture. Chinese people take pride in their ability to find good deals. Foreigners often forget to ask for lower prices, so the sales clerks will refuse to sell the products or they will intentionally give a 30% discount to honor the haggling tradition.

I got my fair share of deals, both good and not so good, but the experience was worth it. Here’s a picture with one of my conquests, a very traditional Chinese piece of garment, namely a Tottenham Hotspur shirt. COYS! (Come on you Spurs, for the non-football muggles). I proudly received a 70% discount for it. The trick is to build some tension when you ask for a lower price. Here’s what worked for me: You ask for the price. The salesperson tells you it’s 200 RMB. You get a confused look on your face and say that you’ll pay 10 RMB. Now it’s the salesperson’s turn to gets a confused look on his/her face, so you’ll hear 180 RMB is the best price. You agree, but you tell him/her you only have 30 RMB on you. The price drops to 150 RMB. You say you can’t afford it, so you prepare to leave. The salesperson will stop you and offer a better deal: 100 RMB. You say your last offer is 40 RMB. You’ll probably hear a no, so you leave. And when you’re almost out of the store, the sales guy/lady will run after you to get the 40 RMB you offered. Congrats! 恭喜!

Looking for bargains at the fake market is an enjoyable activity if you manage to keep your spending habits on a leash.