The orderly fashion of China – Vasi

The universe is chaos, and science states that life has its source in that obscure chaos, which then turns into some sort of order. It sounds mysterious, but I’m not that much into physics, so I’ll skip the scientific part.

During my year of study in China, I witnessed impressive levels of order. Safety is not an issue on the streets of Chinese cities as most of them are closely watched by public security officers. Moreover, most of the subway entries have security controls where they scan your bag, just like at the airport. Another thing that I find important is the presence of the automatic sliding doors on the subway platforms, so even during rush hour, you can get on the subway car safely.

During one of my trips to Shanghai, I had the chance to see order in the chaotic crowds of a metropolis. It goes without saying that cities with the population exceeding 10 million can get a bit suffocating at times. Shanghai is no exception with its more than 20 million people, especially during festivals. It was the beginning of April when a Turkish classmate and I decided to pay Shanghai a visit, forgetting about the possibility of a festival being around the corner. It was Tomb Sweeping Day (清明节).

Chinese people pay homage to their ancestors by engaging in different rituals, such as cleaning the tombs; hence the name of the festival. That doesn’t mean the atmosphere in the city is bleak, au contraire, the city becomes more vibrant than ever. And I mean any city. Chinese people treasure their traditions. Also, such festivals mean official days-off for the citizens, who go on short trips to explore new places. The most popular means of transport is the train, so train stations are replete with fellow travellers. For example, the Hongqiao Railway Station is quite a show in itself thanks to the large number of people. As intimidating as it may seem, tourists can easily claim their tickets and then find the right gate to board the train. No worries.

Shanghai has a lot in store for the eager tourists. The most popular touristic spot is the Bund, where you can admire the city skyline and the HuangPu river. Luckily, I’d visited the Bund before the weekend with the festival, so I didn’t necessarily want to go there again, but I still wanted to check the bustling streets of Shanghai on such a special occasion. Nanjing Road, the biggest commercial avenue in Shanghai, was decently crowded, but as we were gradually approaching the Bund, an unusual phenomenon came into sight. There were no cars on the street, but both pedestrian sides were occupied by the masses of people. They were slowly marching to one end of the street on one side, and vice-versa on the opposite side. Police officers were guiding the people to make sure the pedestrian traffic went smoothly. The demonstration of order was top-notch. Still no cars on the street, probably as a measure of safety for the unusual number of visitors. A guy there told me that reaching the Bund platform wouldn’t be a good idea, because once you were in the crowd, you couldn’t go back, so you had to walk for dozens of minutes on the beautiful shore of the HuangPu river. The public ferry was also closed during this time to ensure safety.

Chinese officials know how to handle such situations, so feel free to visit China whenever the travel bug bites you. 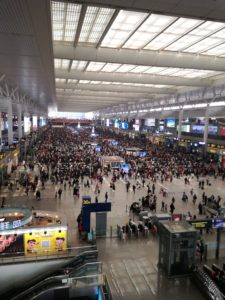 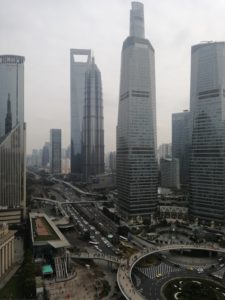 Note: There’s no need for copyright statements because the pictures and the video belong to me.