Acasă › Blog › That time I got adopted in China – Eliza

It was so cold in Hangzhou during that time and my kongtiao (air conditioner, but we all call it kongtiao) was not very effective, I couldn’t stand there anymore doing nothing in the cold, so I went on a short trip to Fuzhou. The temperature lifted from 5 degrees to 18 degrees and I spent the 小年 (little new year) there, which was a week before the Chinese new year.

When I finally arrived in Quangang, everyone treated me as if they grew up with me, which was surprising, coming from people who never talked to a foreigner. I had to bring a gift for the grandparents, and there are so many things you should never give as a gift to Chinese, such as a clock, white chrysanthemums, green hats or umbrellas. I chose to give them longjing tea, since old people like healthy teas and foods.

On the first day of spring festival, the close family meets up and spends the day and night together, staying up almost all night. The older people played mahjong until 3am, young cousins played drinking games or board games. I had trouble staying up after a long train ride of 8h from Hangzhou. The only thing that managed to calm me was the Buddhist altar in the kitchen; a soothing meditation song could be heard from it and it was singing non stop, candles always lit. Most Chinese traditional homes have altars.

There was so much food, including weird things like half-cooked fish, hotpot with duck blood and pig brain, live seafood that was cooked right in front of me. A 16 years old girl taught me how to take the shell off a squid and 10 people watched me do it, then asked me to eat (entertain them) more. Usually, on the second day of Spring Festival the whole family will meet in one place, at the grandparents place.

So there were over 100 people gathered at many tables, eating together, while kids were setting off very loud firecrackers around us.

On the rest of the days, people go to each family’s home to visit and have lunch. Children have a month long vacation too. So I ended up having to go to 4 families, where I had to eat more than I could, and I’m lucky I’m not a man, because men have to drink a lot too. One of the children played the guzheng for us (Chinese musical instrument) and the other kids watched Peppa Pig, a very popular show in China, and received 红包 red packets with money. I took the family photo for them, and there were 50 people.

Almost forgot to mention that people there speak hokkien, so no, I could not practice my mandarin, but my hokkien. My most used/heard sentences (humor included) were: wa jiak bao (I’m full), dong wei tiao (can’t stand it), lai lim te (come drink tea), paixie (sorry), gamxia (thanks) and lou wa tia (get out of  my car).

Yes it was a crazy ride, but I’d do it all over again, many many times, especially if my kongtiao broke again. 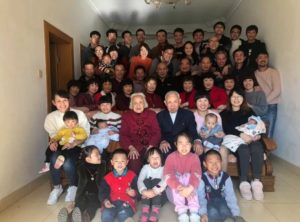 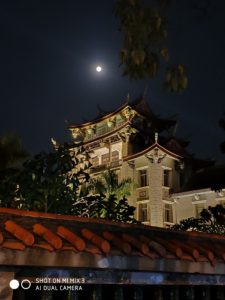 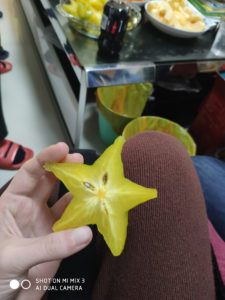